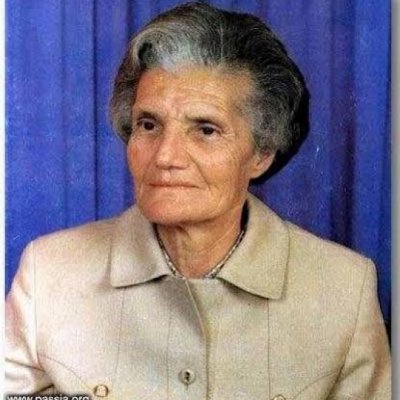 Hind al-Husseini was born in Jerusalem to Tahir and Fatima al-Husseini. She had five brothers: Burhan, al-Mahdi, Sadiq, Zain, and Jamal.

Her elementary education was completed at the Islamic Girls’ School near al-Aqsa Mosque. In 1932, she enrolled at the English Girls’ College, graduating in 1937. In 1938, she did independent studies in Arabic and English literature.

She worked as a teacher for one year at the Islamic Girls’ School and then stopped teaching for a short while when World War II broke out, but later resumed teaching at that school until the end of the academic year 1945–46.

In 1948, Hind al-Husseini began to focus her activities on volunteer social work and took part in establishing the Social Cooperation Society for Women in Jerusalem. The society, which eventually had twenty-two branches in Palestine, carried out studies of the conditions of women and children in Palestinian towns and villages, established kindergartens, organized campaigns to combat illiteracy, and set up centers to teach dressmaking.

In April 1948, while passing through the Old City of Jerusalem on her way to attend a meeting, Husseini saw a group of refugee children wandering in the streets, the oldest being nine years old. Their condition was deplorable. They had fled from the village of Deir Yasin following the frightful massacre perpetrated in that village by Zionist terrorist groups. She decided on the spot to take them to her apartment and later moved them to her family home. She then proceeded to establish a charitable society to serve the needs of orphaned and destitute Palestinian children and called it Dar al-Tifel al-Arabi [The Home of the Arab Child]. From humble beginnings, this society grew in the fifties and sixties to become a prominent national educational institution, which included nurseries, kindergartens, and preparatory and secondary educational levels; a secretarial school; an anti-illiteracy section; and a section to teach dressmaking and domestic management.

The Home of the Arab Child had its own bus, which Husseini used to ride to villages to collect orphans and bring them to her institution. At times, she would give shelter to both the mother and her orphaned children.  To advance her educational and social effectiveness, Husseini attended the University of Hamburg in Germany for three successive years and for four continuous months each year during the period 1963–65.

Within the Home of the Arab Child, Husseini founded in 1960 a museum of Palestinian popular culture, which included valuable antiques, traditional craft instruments, and popular embroidered dresses from various regions of Palestine. She constantly added to the museum collections.

During the Israeli aggression of June 1967, Husseini transformed the Home of the Arab Child into a clinic to treat the wounded. But this did not save it from Israeli attack. The clinic was shelled and half of it was totally destroyed; it was rebuilt with assistance from the Norwegian Red Cross.

In 1982, the former house of the celebrated Palestinian man of letters Isaaf al-Nashashibi was bought and turned into the Isaaf al-Nashashibi Center for Culture, Arts and Literature. It was set up to be a research center for Islamic studies and an institute of higher studies. With the assistance of Dr. Ishaq Musa al-Husseini, Hind al-Husseini founded a library at the center which came to include thousands of books dealing with the Arab and Islamic heritage.

In addition to her responsibilities at the Home of the Arab Child, Husseini was a member of several social and educational societies. She was a member of the board of trustees of Jerusalem University, the Maqasid Charitable Association, the Mercy to the Elderly Society, the Girl Refugee Society, and the Arab Orphan Society.

For her pioneering role in social work, Husseini was awarded several medals: a medal from Pope Paul VI when he visited Jerusalem in 1964, the honorary Italian medal Adelai Distori awarded to pioneering women in the world, the Jordanian Kawkab medal for education, and the First Class Medallion from Germany.

Hind al-Husseini died in 1944 in Jerusalem and was buried there.

She is without doubt one of the most prominent pioneers of education and volunteer social service in Palestine and one of the most successful and effective. She devoted her entire life to the service of her people and homeland and to the care of orphans, children of martyrs, and the wretched.

In 2010, the Palestinian film director Sahira Derbas narrated (in her documentary I Had 138 Pounds) the story of Husseini’s limitless commitment to the cause of orphaned children. In his political film Miral, produced also in 2010, Julian Schnabel told parts of the story of Hind al-Husseini.