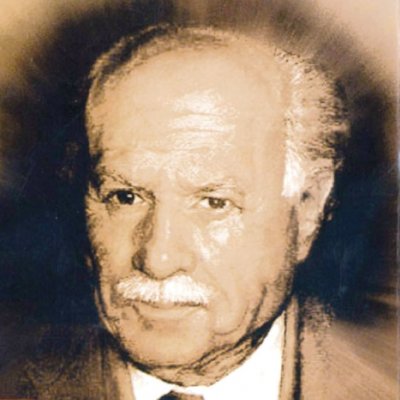 Ihsan Abbas was born in the village of Ayn Ghazal, some twenty-five kilometers south of Haifa. He was the son of Rashid and Fatima Abbas, and he had two brothers, Tawfiq and Bakr, and one sister, Najma. His wife, Ni‘mat Sharkas, was from the village of Qisariya south of Haifa. They had three children: Nirmin, Iyas, and Usama.

His father was a sheep merchant of limited means, and Abbas’s early years were ones of poverty. As a child, he was very keen to learn and to excel in his studies.

His education began in the village school; he moved to the government school in Haifa where he spent four years and completed the first secondary school year. He then went on to the Acre School where he completed his second secondary school year. His ambition was to join the Arab College in Jerusalem where acceptance was restricted to the most able students in all the government schools of Palestine. His zeal for learning and his hard work finally got him an acceptance to that college, and he attended it from 1937 to 1941.

Graduates of the Arab College were qualified to teach in government secondary schools, so upon graduation he was appointed at the Safad School where he remained until 1946. Graduates of that college were also entitled to apply for a scholarship to complete their university education outside Palestine, and he was awarded a scholarship to study Arabic Literature at Fuad I University (later University of Cairo), where he obtained a B.A. degree in 1949. This coincided with the Nakba of Palestine and the loss of his homeland. The Zionist forces had occupied his home village, Ayn Ghazal, in the autumn of 1948 while he was in Cairo. His family, like so many others, was dispersed and eventually found refuge in Baghdad.

With few options, Abbas remained in Egypt, working as a teacher in a Cairo school and continuing his studies there. In 1952 he completed a Master’s thesis entitled “Arabic Literature in Islamic Sicily” under the supervision of Professor Shawqi Dayf. Abbas continued his studies for the doctorate and chose as his dissertation topic “Asceticism and its Effect on Umayyad Poetry,” supervised by the same professor. He was awarded a doctoral degree in 1954. However, he was not happy with the substance of the thesis, realizing after its defense that, in his words, “its subject was not fit to be the focus of a scientific investigation.” So he did not publish it.

In early 1951, he left Cairo for Khartoum to teach Arabic literature at Gordon Memorial College (later the University of Khartoum), where he spent ten years. When his contract was not renewed, he moved to Beirut to teach at the American University. Abbas was to spend a quarter of a century at that university, and during those active and productive years he produced his richest scientific work. This was due to the sense of stability that he felt there and the liveliness and cultural pluralism that characterized Beirut and the university before the civil war of 1975, together with its free and open atmosphere.

As a professor at the American University he was invited to take part in many academic conferences. Each summer he would attend orientalist conferences in various western cities and was invited to lecture at European and American universities where he met scholars and researchers working in Arabic and oriental studies. In 1970 he lectured at several British universities. The following year, he was invited to visit German universities and centers of oriental studies. His contacts with German orientalists had grown through the German Orient Institute in Beirut, so he was appointed honorary member of the Society of German Orientalists, the Deutsche Morgenlandische Gesellschaft.

During the academic year 1975–76, he was invited as a visiting professor by Princeton University where he wrote two books: Trends in Contemporary Arabic Poetry and Greek Aspects in Arabic Literature. Unable to return to Beirut because of the civil war, he spent a second year at Princeton, and then returned to the American University and remained there until his retirement in 1986, when he left Lebanon.

Amman was to be his final destination and where he spent the remaining years of his life. Despite what he described as an atmosphere of despondency imposed on the Arab individual by the political situation in the Arab world, Abbas pursued his scientific and literary work as author, editor of classical texts, and translator. During that period he published his autobiography, The Shepherd’s Exile, and published a collection of poems he had composed in his youth in Palestine entitled Wild Flowers. He also was a member of theses committees both at the University of Jordan and the University of Yarmuk and worked at the Royal Institute to complete the Encyclopedia of Islamic Civilization.

His health had begun to fail since 1994, made worse by his feeling of frustration he attributed to the many tragedies experienced by his nation and to what he described as the loss of a spark that shone inside him, enabling him to work and live.

Ihsan Abbas was a gentle, soft-spoken, charming, and humble man who was immensely generous with what he knew and was the object of much affection by his colleagues and students.  He taught generations of students and researchers in Sudan, Lebanon, Jordan, and elsewhere. He was a model critic and historian, an editor of classical texts and translator of the first order. He was variously described as “custodian of our literary heritage,” “keeper of literature,” “ the shaykh of Arab critics and editors,” “an outstanding scholar,” and  “a vast encyclopedia of learning.” He authored more than twenty-five books of literary criticism, biography, and history; edited with immense accuracy some fifty-two classical works; translated, singly or with others, twelve books from English; and published numerous articles in academic journals. In his critical and academic work, he was distinguished by his very wide knowledge of both classical and modern Arabic literature and of classical and contemporary western literature. He was a member of several Arab scholarly academies and several committees that judged major Arabic literary prizes.

During his lifetime, Abbas received many accolades, prizes, and medals. He won the King Faisal International Prize in 1980, the Thornton Wilder Prize for Translation by Columbia University in 1983, the Sultan Al Owais Award in 1990–91, and al-Furqan Foundation award for Islamic Heritage in 2002. He was also awarded the Lebanese Education Medal in 1981 and the Jerusalem Medal from the PLO in 1988. The Egyptian Ministry of Culture honored him at a ceremony in the Cairo Opera House in 1995 as did the Abd al-Hamid Shuman Foundation in Amman in 1998. In 1999, the President of Lebanon awarded him the National Order of the Cedars, Knight Class.

On the tenth anniversary of his death, the Palestine Cultural Forum announced the creation of the “Ihsan Abbas Prize for Creativity and Culture” in order to perpetuate his memory.

[The Art of Poetry]

[The Art of Biography]

[Arabic Poetry in the American Diaspora (with M.Y.Najm)]

[A History of Andalusian Literature: The Age of the Dominion of Cordoba]

[A History of Andalusian Literature: The Age of Independent Kingdoms and of Almoravids]

[Badr Shakir al-Sayyab: A Study of His Life and Poetry]

[A History of Arabic Literary Criticism]

[The Poetry of the Khawarij]

[The Arabs in Sicily]

[A History of Bilad al-Sham from the Pre-Islamic Period to the Beginning of the Umayyad Period, 600-660A.D.]

[Chapters dealing with the Cultural and Civilizational Life in Palestine]

[A Dictionary of Sicilian Scholars and Poets]

Ernst Cassirer, An Introduction to a Philosophy of Human Culture and An Essay on Man. Beirut: Dar al-Andalus li-l-tiba‘a wa-l-nashr, 1961.