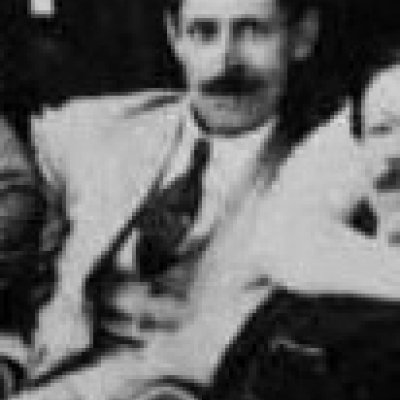 Rafiq al-Tamimi (also known as Mohammad Rafiq al-Tamimi) was the son of Ragheb al-Tamimi, who hailed from a prominent landowning family in the city of Nablus. Tamimi attended elementary school in Nablus. In 1902, he enrolled in the Marjan preparatory school in Istanbul and then the Malakiyya college there, where he studied for three years and excelled academically. As a result, he was given a scholarship to the Sorbonne in Paris to continue his higher education. There, he received a licence in literature and education.

While in Paris, Tamimi, Awni Abd al-Hadi, and five others established a secret association called al-Arabiyya al-fatat (Young Arab Society) in 1911. It was one of the first Arab nationalist organizations that called for equality between Arabs and Turks in the Ottoman Empire and the establishment of a decentralized system of government in the empire’s Arab provinces.

After that, Tamimi was selected as president of the Union and Progress Club in Damascus. He was appointed professor of social studies at the Maktab Sultani of Izmir, then professor of literature and philosophy in the Maktab Sultani of Damascus, and then principal of the school of commerce founded by Nazim Pasha, the wali or provincial governor of Beirut during World War I. Then he resumed his career as a professor of history at the Salahiyya school in Jerusalem.

When Sharif Hussein, the emir of Mecca, proclaimed the Great Arab Revolt against the Turks in June 1916, Rafiq al-Tamimi joined the army of Prince Faisal bin Hussein and was part of the contingent that captured Damascus in early October 1918. He was one of the members of the independent Arab government that was formed at the time. He was then appointed as civilian advisor to the military commissioner sent by the Arab government in Damascus to Beirut.

Tamimi was one of the representatives of Palestine (“southern Syria”) at the General Syrian Congress, which was convened in Damascus for two sessions in June 1919 and March 1920. The Congress demanded that Greater Syria be a completely independent country within its natural borders and rejected the Zionist Balfour Declaration and Jewish immigration to Palestine. It also rejected any British and French domination over the Arabs and chose Prince Faisal as the constitutional king of the country within the framework of a parliamentary monarchy system of government.

After French forces entered Damascus in July 1920 and overthrew Faisal’s government, Tamimi was forced to leave Syria and move to Palestine. There, he was appointed dean of the Islamic College [al-Kulliyya al-Islamiyya] in Jerusalem. Then he moved to Jaffa as principal of al-Amiriyya Secondary School and remained in that position until he became eligible for retirement.

Tamimi was close to the Palestine Arab Party and to the leadership of Hajj Muhammad Amin al-Husseini. After the end of World War II, he was nominated to the Arab Higher Committee and made head of its Jerusalem office. Between 1945 and 1947, he was one of the officials in charge of the paramilitary organization al-Najjada, which later merged with the armed groups al-Futuwwa and al-Jawwala under the umbrella of the Arab Youth Organization, an incubator for training young people to confront the Zionist militias.

On 22 November 1947 Tamimi and Sheikh Abu al-Saud organized a meeting of prominent nationalist figures from Jaffa. The meeting resulted in the formation of a fifteen-member national committee, which was the first national committee to be formed under the aegis of the Higher Committee.

Following the adoption of the UN resolution to partition Palestine on 29 November 1947, and the outbreak of fighting between Arabs and Jews, the Arab Higher Committee directed Tamimi to travel to Jaffa on 5 December 1947. There, he played a prominent role in providing the essential equipment needed for the defense of the city. He also delivered a written instruction from the Arab Higher Committee that transferred the power to supervise security for Jaffa from the national committee to the former leader of the Najjada, Mohammad Nimr al-Hawwari. However, the latter soon overstepped the limits of his authority, which prompted the Arab Higher Committee to summon him and compel him to go into exile in Cairo. In his place, it charged Tamimi and Hassan Salameh with forming a military garrison to defend the city.

After the 1948 Nakba, Tamimi was forced to migrate to Damascus and settle there, where he became director of the Arab Higher Committee’s office. He also taught history at the Syrian University.

Tamimi died in Damascus in 1956 and was buried in the Jabal al-Muhajireen cemetery. Before his death, he donated his library to the Zahiriyya Library in Damascus, which was attached to the Arab Academy there.

Rafiq al-Tamimi was a Palestinian historian with a prolific output. He was a genuine educator, as well as a veteran politician, one whose interest in historiography and teaching history did not prevent him from doing political work. On the eve of World War I and in its immediate aftermath, he was one of the first [Palestinians] to take an active part in the Arab nationalist movement and in the independent Arab government that was formed under the leadership of Prince Faisal in Damascus. Then, after World War II, he became prominent as an activist in the Palestinian nationalist movement who was a confidant of Mufti Muhammad Amin al-Husseini. He stood out for his sound sense of judgment, his vast knowledge, and his wisdom, coupled with a warm personality and presence.

[Feudalism and the First Feudal Territory in Islam]

[A History of the Present Age, as per the Curriculum for Palestinian Government Higher Secondary School, Year Three]

[A History of Modern Europe]

[The Vilayet of Beirut in two parts. Jointly written with Muhammad Bahjat]