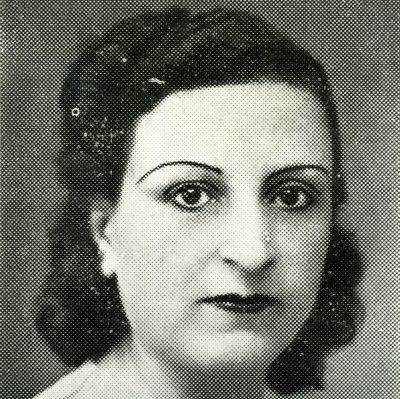 Asma Tubi was born in Nazareth. Her father was Rizq Tubi. Her husband was Ilyas Niqula Khuri. She had a daughter, Salwa.

She began her education at the English School in Nazareth where she showed a notable aptitude for languages. She continued to learn both English and Greek through private study and reading. Following her marriage and her move to Acre with her husband, she studied the Qur’an in order to perfect her Arabic.

Ever since she was a young girl she had shown a marked inclination to literature and poetry. Her father, Rizq, was himself a poet and it was he who taught her the classical mu‘allaqat odes and other classical Arabic poems together with the rules of prosody and of public declamation. Poetry became her spiritual nourishment, as it was for her father.

In the 1920s Palestine witnessed a renaissance of the theater. The young Asma boldly joined this movement and her first play, written while she was only twenty years old, was widely acclaimed. This five-act play, The Execution of the Russian Tsar and His Family, was published in Acre in 1925. Other plays followed: Origins of the Christmas Tree, Patience and Deliverance, Women and Secrets, Martyr for Loyalty, Tit for Tat, and Gambling. The last two were one-act plays, and all the others were three- or four-act plays. Most of these plays were staged in public or school theaters.

After the al-Buraq uprising, an Arab Women Society was formed in Jerusalem, and similar societies sprang up in several Palestinian cities; they were also known as Arab Women committees. Asma Tubi played a prominent role in establishing an Arab Women Committee in Acre. As women activities grew during the Great Strike and Revolt of 1936–39 and shifted from social and humanitarian work to activities in the field, she played a significant part in collecting contributions and supplying the rebels with money and in supervising the training of nurses and field hospitals. Together with colleagues she visited the wounded and the families of martyrs, providing them with food and medication.

In addition to her committee work, she continued her radio and journalism activity. She was one of the first female broadcasters on Palestine Radio, founded in 1936 and known as “This is Jerusalem.” She had a weekly broadcast aimed especially at women. In one broadcast, called “To the Arab Mother,” she emphasized three principles of child rearing: truthfulness, a sense of duty, and honor. When the Near East Radio Station opened in Jaffa, she broadcast her talks from that station and published many articles in newspapers, especially in Filastin, where she managed the women’s page.

* the social and humanitarian fields. After the meeting of the Eastern Women Congress in Cairo in 1938 at the invitation of Huda Sha‘rawi, head of the Egyptian Feminist Union, many of the women societies and committees in Palestine became unions. When the Women’s Union was formed in Acre, Tubi was first its secretary and later its chairwoman right until the Nakba of 1948. She was also a member of the Young Christian Women Association (YWCA) and chairwoman of the Young Orthodox Women’s society.

* activism. As the revolt of 1937 against the partition proposal gathered strength, she called for demonstrations which she led, and she drafted many statements of protest against British and Zionist colonialism, becoming a model for those around her of faith, patriotism, and steadfastness.

* writings about homeland and women. She published her books in Acre in the 1940s. Arguably her most important publication of that period was a manuscript entitled “The Palestinian Arab Woman,” a study of the accomplishments of the Arab women of Palestine. She had sent it off to the press in 1948 but was driven out of Acre along with the other inhabitants of the city, leaving behind that manuscript; it was never published.

Tubi settled with her family in Beirut and resumed her activity. She broadcast a number of talks on Lebanon Radio and wrote articles for several newspapers and magazines, including al-Hayat, Kull shay’, the weekly al-Ahad, and the monthly Dunia al-mar’a, on subjects ranging from Palestine to women and humanitarian issues.

In the early sixties she began working on her most famous work Abir wa majd, which ever since its appearance in 1966 has been considered one of the most important works on Palestinian women. This work includes interviews she conducted with Palestinian women from all walks of life. Tubi wrote up their experiences as she heard them told to her, and it may well be the first attempt by a woman to write oral history. She reached women living in other countries through correspondence, and she further collected biographies of women martyrs and of the dead.

In 1972 she published her poems under the title Hubbi al-kabir. Despite her extensive knowledge of modern verse, her fine sensibility (which found a fertile field in poetry), and her talent in writing free verse, it was the only book of poetry she published. Nor did she ever return to playwriting. She concentrated her efforts on translating and publishing literary passages that she considered important. This was the subject of her work entitled al-Dunia hikayat, which were real-life stories collected from among many to be found in magazines, each story of which was written by the woman herself who had undergone a particular experience. In 1973 she was awarded the Grand Constantine Medal, officer class, one of the first women in the world who won that award.

Asma Tubi died in 1983 in Beirut and was buried there. In January 1990 she was posthumously awarded the Jerusalem Medal for Culture, Arts and Literature by the Palestine Liberation Organization.

[The Murder of the Russian Tsar and His Family. A Play]

[The Young Girl and How I Would Like Her to Be]

[On the Altar of Sacrifice]

[Conversations from the Heart]

[The World as Stories]

[On the Road with Him]