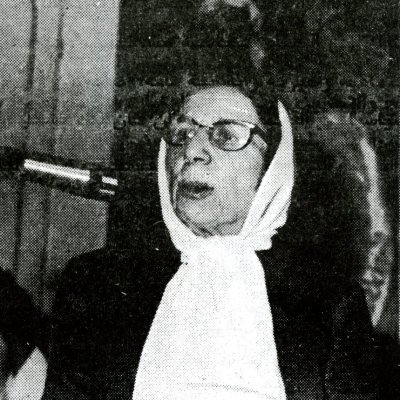 Launch of the Great Revolt

Shihabi Becomes President of the Union of Charitable Societies in Jerusalem

The General Union of Palestinian Women Is Formed in Jerusalem

Zulaykha al-Shihabi was born in Jerusalem. Her father was Ishaq Abd al-Qadir al-Shihabi, and her mother was Zainab al-Muhtadi. She had two brothers, Subhi and Jamil, and two sisters, Rasmiyya and Rifqa.

She was educated at the Notre Dame de Sion school. Her father (unlike most fathers at the turn of the century) insisted on sending his daughters to school to learn the sciences and languages, and Zulaykha was among the top students in her class.

From an early age she became conscious of the dangers of Zionism. She had been raised in a family with deep roots in Jerusalem, and she learned the history of her city since its earliest Arab Islamic days. She in turn conveyed to her classmates what she had heard from her parents.

She joined the nationalist struggle during the turmoil that followed the al-Buraq rebellion. She was present at the Palestine Arab Women's Congress, which was held in Jerusalem in October 1929, was the first women’s political meeting at the national level, and was attended by some two hundred women, to discuss the political situation. The meeting then issued a memorandum setting out the reasons behind the rebellion and the demands of the people. She was elected as a member of the delegation that presented the memorandum to the High Commissioner. Matiel Mogannam gave a short speech in English; Tarab Abd al-Hadi gave a speech in Arabic. When the delegation returned to the meeting, a massive demonstration by women broke out, with some one hundred cars driving through the streets of Jerusalem and shouting thunderous slogans, amidst enormous popular enthusiasm.

She cofounded the Arab Women Association in Jerusalem as a follow-up to the resolutions of the 1929 meeting. Similar women associations were founded in most cities; some went by the name Arab Women’s Committees.

She worked with Milia al-Sakakini in a voluntary and free campaign to teach young girls basic reading and writing skills, and she founded al-Dawha School, which became well known for the education and health care it provided young girls.

Through the Arab Women’s Committees she played a prominent role during the General Strike and the Great Arab Revolt (1936–39). It was her idea to organize a large audience to attend the trials of rebels to raise their morale and to show the authorities that the people were behind their heroes.

She was a prominent member of the twenty-seven member delegation of Palestinian women that took part in the Eastern Women Congress in Cairo at the invitation of Huda Sha‘rawi, the Egyptian feminist leader, for the purpose of supporting the cause of Palestine. The conference convened in Cairo in October 1938 and included a very large number of Arab women who were pioneers in the social and national fields. Palestine was the focal point of that First inter-Arab women congress. Shihabi delivered her speech in the name of the Women Association of Jerusalem and spoke of the history of the problem and of British policy. When the congress came to elect deputies from each delegation, Shihabi and Wahida al-Khalidi were elected from the Palestinian delegation. At the end of the congress, she was invited to deliver a speech in the name of Palestine; she thanked everyone and ended with these words: “We return convinced that the people of Palestine are not alone as they wage their sacred struggle to save their homeland.”

In heath and social welfare matters, her most notable achievement was to create, through the Women’s Union, a first-aid field committee charged with treating the wounded. She also created a clinic to treat the destitute, provide free inoculation against infectious diseases, and care for pregnant women and childcare; she also took part in securing shelters for orphans. The union defrayed the cost of educating tens of orphans in Dar al-aytam al-Islamiyya. In Jericho, she founded a winter resort for convalescence and a home for destitute women. People remember her as a woman who used to visit prisons and detention camps to encourage rather than console prisoners, carrying with her symbolic presents for political detainees to let them know that the people supported them.

She showed a special interest in sports. Under her supervision the union established a sports club with its own executive committee, its own sports program, and a large playing field. When the union held its conference on 16 July 1946, attended by a large number of Arab women from various Arab capitals, the flags of their countries were displayed on the sidelines of the playing field.

In the 1940s, she intensified the union’s activities in the cultural domain and sent out invitations to writers and artists to give lectures on scientific and national themes and to discuss cultural issues.

The secret of her success was that she did not rely solely on voluntary contributions but on productive work as well. Thus, the union from the very beginning bought several plots of land planted with vines or fruit trees and presented these plots to families of martyrs who would then care for the land and live off its produce. So too with women. The union taught them needlework and weaving in order to provide them with an income. The most notable decision was to teach young girls the art of flower making; they began to create artificial flowers. Shihabi herself would happily join them in their work and would join them also as they manufactured beauty creams. The union frequently organized charitable markets to sell its diverse products and spend the proceeds on charitable projects.

After the Nakba she redoubled her activities. Jerusalem remained her primary residence, but she frequently traveled to Amman. In 1959 she added to her other responsibilities the presidency of the Union of Charitable Societies in the Jerusalem District.

She travelled extensively, attending Arab and international women’s conferences, and visited both Britain and Russia in addition to many Arab capitals. She was an ideal representative of the Palestinian woman and the most eloquent in explaining the Palestine cause in public forums.

As an elected member of the executive of the General Union of Arab Women, she attended the meetings of the union as well as conferences devoted to women’s issues in Beirut, Cairo, and Jerusalem. She was a prominent female member of the First Palestine National Congress, from which emerged the PLO on 28 May 1964. As president of the Jerusalem women’s union she sought to popularize the idea of creating a general union of Palestinian women.

On 20 February 1965, she organized a general meeting in Jerusalem of representatives of women’s unions in Palestinian cities to prepare for a general conference to include Palestinian women both in Palestine and the diaspora and with the object of creating a broad framework to be called the General Union of Palestinian Women. As chairwoman of the preparatory committee, she oversaw the convening of the Palestinian Women’s Congress in July 1965 in Jerusalem. This was attended by 174 members, and the PLO Department of Popular Organizations contributed to the creation of the Union on the constitutional, organizational, and administrative levels. The union then came into existence.

After Israel occupied East Jerusalem and the West Bank in 1967, Shihabi was one of the first figures it deported to Jordan. However, the intervention of several states and the United Nations forced Israel to allow her to return and resume her work as president of the union. She continued to work tirelessly until her death at age 89.

She died on 13 May 1992.  Her funeral prayer was held at al-Aqsa Mosque and was attended by many prominent national figures.

A Watershed in the Arab-Israeli Conflict