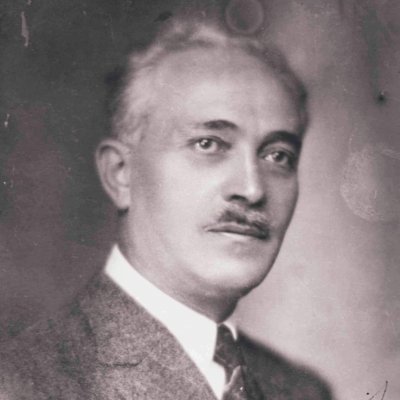 Raghib al-Nashashibi was born in Jerusalem to a prominent Jerusalem family. His father, Rashid, was a wealthy Jerusalem notable and a member of the governing council of the Jerusalem mutasarrifiyya (Ottoman province). He had three children: one, Mansur, worked in the Jordanian government, and the other two lived in France.

He completed his primary education in the schools of Jerusalem and then enrolled at the Jerusalem Maktab Sultani  (Ottoman high school). Thereafter he travelled to Istanbul to pursue a degree in civil engineering.

In the spring of 1919, Nashashibi took part in a meeting held by a number of Palestinian nationalists in Jerusalem on the eve of the arrival of the American King-Crane Commission of Inquiry in Palestine. The meeting resolved to demand the independence of Palestine within an Arab union and to reject Zionism and the Jewish National Home.

British military governor Ronald Storrs appointed Nashashibi  mayor of Jerusalem in 1920, succeeding Musa Kazim Husseini who had been charged  with inciting the bloody clashes between Arabs and Jews in Jerusalem in early April of that year and dismissed from his position. He was re-elected mayor in the elections of 1927 and remained in that post until 1934 when Hussein Fakhri al-Khalidi was elected.

He participated in the joint Palestinian-British Committee formed by the British High Commissioner to organize and administer Islamic affairs. The committee proceeded to formulate the basic regulations of an Islamic Religious Society on 12 March 1921, from which emerged the Supreme Muslim Council.

Nashashibi, together with some mayors, businessmen, and landowners, constituted what came to be known as the “opposition” to the majlisiyyun led by Haj Amin al-Husseini, Mufti of Jerusalem and head of the Supreme Muslim Council (al-majliss). The opposition bloc (led by Nashashibi) attended the seventh Palestine National Congress held in June 1928, and he became a member of the Arab Executive Committee that resulted from that congress. In that capacity, and following the al-Buraq / Western Wall Disturbances, he travelled to London with the Executive Committee’s delegation in March 1930 to negotiate with the British government.

When Haj Amin al-Husseini convened the Pan-Islamic Congress in December 1931, in Jerusalem, Nashashibi countered by convening a rival congress at the same time as the other, and also in Jerusalem, calling it the Conference of the Islamic Palestinian Nation.

In early December 1934, Nashashibi founded and led a political party called the National Defense Party. Its declared program was the Palestinian National Covenant, which called for rejecting the Balfour Declaration, Jewish immigration, selling land to Jews, and the formation of a national parliamentary government.

On 25 April 1936, and following the General Strike, Nashashibi became a member of the Arab Higher Committee chaired by Haj Amin al-Husseini, as a representative of the National Defense Party. However, he resigned from that committee on 4 July 1937, a few days before the publication of the report of the British Commission of Inquiry headed by Lord Peel.

When the revolt broke out again in the autumn of 1937 as a protest against the Peel Commission’s proposal, Nashashibi and the opposition failed to fill the political vacuum created when Haj Amin al-Husseini fled to Lebanon to avoid arrest by the British.

During World War II, the opposition led by Nashashibi failed to replace the majlisiyyun in leading the nationalist movement. The breach between the two groups persisted over the years, which led to very serious consequences for Palestinian resistance to the British Mandate and the Zionist movement.

In November 1945, he participated as leader of the National Defense Party with the other Palestinian parties (Palestine Arab Party, Independence Party, National Bloc Party, Reform Party, Arab Youth Congress Party) in reconstituting the Arab Higher Committee that had been banned by the British authorities in 1937.  However differences between Jamal Husseini, head of the Palestine Arab Party (and also head of the Arab Higher Committee) and the leaders (including Raghib Nashashibi) of the other Palestinian parties led to the withdrawal of the latter from the Committee and their forming an Arab Higher Front in May 1946. This situation lasted until 12 June 1946, when the League of Arab States supervised the formation of a new Arab Higher Committee  consisting of four members, two from the front and two from the older committee.

Nashashibi and Haj Amin al-Husseini were principal rivals who failed to come together during the worst crisis that befell the country in 1948. Nashashibi spent the year of the Nakba, 1948, in Egypt. He then returned to Jordan where he was appointed minister in the Jordanian government and then Governor General of the West Bank, which after annexation became part of the Hashemite Kingdom of Jordan. He was also appointed Guardian of the Noble Sanctuary (al-Haram al-Sharif) and other sanctuaries.

He was awarded the Commander of the British Empire distinction by the British government.

Raghib al-Nashashibi was a charming and sociable figure, attractive in speech and physical appearance, with a sense of humor and very loyal to his friends. He was known for his elegant attire and his luxurious style of life.

He died in Jordan and was buried in Jerusalem.