The village stood on a slightly elevated hill on the southwestern edge of the Marj ibn 'Amir Plain, on the two banks of Wadi al-Lajjun. Jenin as well as the plain were visible from al-Lajjun. It was bordered on the west and south by the Carmel Mountains

, by Tall al-Mutasallim (to the northeast), and by Tall al-Asmar (to the northwest). The village, which was linked by secondary roads to a highway between Jenin and Haifa and to another highway that led southwest to the town of Umm al-Fahm, lay close to the junction of the two highways.

After the Bar-Kochba Revolt had been suppressed in A.D. 130 the Roman emperor Hadrian ordered a second Roman legion, the Legio VI Ferrata ('Ironsides'), to be stationed in the north of the country. The place where it established its camp was known as Legio. When in the third century the army was removed, Legio became a city and its name was augmented with the adjectival Masimianupolis. This remained its name throughout the Byzantine period. It came under Arab control in the seventh century A.D. during the early days of the Islamic conquest. AI-Lajjun was the site of more than one military confrontation between Muslim factions, such as the one in A.D. 945 between the Hamdanids of Aleppo and the Ikhshidids of Egypt in which the renowned Sayf al-Dawla al-Hamadani was defeated.

AI-Lajjun was captured by the Crusaders but was taken back by Salah aI-Din al-Ayyubi (Saladin) in 1187.

A number of Arab chroniclers and geographers mentioned al-Lajjun over the years, including Ibn al-Faqih (writing in A.D. 903), al-Maqdisi (writing in ca. A.D. 985), and Yaqut al-Hamawi (d. 1228). AI-Maqdisi described it as a pleasant town on the edge of Palestine (when the boundaries between Syria and Palestine were different from the present borders) and mentioned its sources of fresh water. AI-Maqdisi and al-Hamawi (in his Mu'jam) reported the presence of what the people of al-Lajjun called the mosque of Abraham, built over a round rock. But whereas Ibn al-Faqih said that the mosque lay outside al-Lajjun, al-Hamawi reported that it was in the center of the town.

A number of Muslim kings and prominent persons passed through the village, including al-Kamil, the sixth Ayyubid ruler, who there gave his daughter 'Ashura' in marriage to his nephew in 1231. The village was also the burial site of two Muslim scholars, 'Ali al-Shafi'i (d. 1310) and 'Ali ibn al-Jalal (d. 1400).

In 1596, al-Lajjun was a village in the nahiya of Sha'ra (liwa' of Lajjun), with a population of 226. It paid taxes on a number of crops, including wheat and barley, as well as on other types of property, such as goats, beehives, and water buffalos.

Zahir al-'Umar, who became the effective ruler of northern Palestine for a short period during the second half of the eighteenth century, was reported to have used cannons against al-Lajjun in the course of his campaign (1771-73) to capture Nablus.

It is unclear whether this attack led to the village's decline in the years that followed; when the British consul for Jerusalem and Palestine (1846-62), James Finn, visited the area, he did not see a village on the site.

The authors of the Survey of Western Palestine noticed a khan, however, to the south of the ruins of al-Lajjun in the early 1880s.

In the late nineteenth century, villagers from Umm al-Fahm moved to the site of al-Lajjun to make use of its farmland. Gradually, they settled in the village, building their houses around the springs, especially next to the khan. When the massive mound at nearby Tall al-Mutasallim (ancient Megiddo) was excavated by German archaeologists in 1903, some of the inhabitants of al-Lajjun reused stones from the ancient structures that had been unearthed to build new housing.

More people moved to al-Lajjun from Umm al-Fahm during the British Mandate, and particularly in the late thirties, due to the British government's persecution of the population for their activities in the 1936-39 revolt that had spread throughout Palestine. AI-Lajjun's economy grew rapidly as a result of the influx of additional population.

As the village expanded it was divided into three quarters, one to the east, one to the west, and another known as Khirbat aI-Khan. Each quarter was inhabited by one or more hamulas (clans): the al-Mahajina al-Tahta and al-Ghubariyya clans, the al-Jabbarin and al-Mahamid clans, and the al-Mahajina al-Fawqa clan.

In 1931 the population consisted of 829 Muslims, 26 Christians, and 2 Jews; there is no exact breakdown for the year 1945. In 1943 one of the large landowners in the village financed the construction of a mosque, built of white stone, in the al-Ghubariyya (eastern) quarter. Another mosque was also established in the al-Mahamid quarter during the same period, and was financed by the residents of the quarter themselves.

AI-Lajjun also had a school that was founded in 1937 and that had an enrollment of 83 in 1944. It was located in the quarter belonging to the al-Mahajina al-Fawqa clan, that is, in Khirbat aI-Khan.

There was a small market place in the village, as well as six grain mills (powered by the numerous springs and wadis in the vicinity), and a health center.

The various quarters of al-Lajjun had many shops. A bus company was established in al-Lajjun by a villager from Umm al-Fahm; the bus line served Umm al-Fahm, Haifa, and a number of villages, such as Zir'in. In 1937 the line had seven buses. Subsequently the company was licensed to serve Jenin also, and acquired the name of al-Lajjun Bus Company.

The villagers cultivated grain, vegetables, and citrus fruits. AI-Lajjun's archaeological heritage has totally disappeared with little record and no excavation. Most ruins have been bulldozed into a heap to allow planting on the fields.

The official Israeli account states that al-Lajjun was occupied shortly before 1 June 1948, following the 'clearing' of the Baysan Valley and prior to the (unsuccessful) Israeli attack on Jenin. At that time, the Golani Brigade captured a number of villages in the vicinity of Jenin, including al-Lajjun, which was entered at dawn on 30 May, according to a press report in the New York Times. Several Israeli columns moved towards the Triangle area at this time, taking a cluster of villages north of Jenin. It is possible that the Golani's Fourth Battalion expelled the villagers directly, in keeping with their practice during their previous operation in the Baysan Valley.

Earlier New York Times reports had stated that the village was first attacked and captured in mid-April, during the battle around the settlement of Mishmar ha-'Emeq (see Abu Shusha, Haifa sub-disctrict). The commander of the Arab Liberation Army (ALA) also reported an assault on 13 April, when Jewish forces attempted 'to reach the crossroads at Lajjun in an outflanking operation.' The attack apparently failed. The Times said that twelve people were killed and fifteen wounded during that offensive. The paper also said that al-Lajjun was occupied a few days later, on 17 April, twelve days after the attack on Mishmar ha-'Emeq had been launched from that village. The account read: 'Lajjun is the most important place taken by the Jews, whose offensive has carried them through ten villages south and east of Mishmar Ha'emek.' The report added that women and children had been removed from the village and that 27 buildings were blown up by the Haganah in al-Lajjun and other villages nearby.

But Arab military sources imply that the village was not occupied at that time, for ALA commander Fawzi al-Qawuqji states that attacks resumed the following month, on 6 May, when ALA positions in the area of al-Lajjun were attacked by Haganah forces. The ALA's Yarmuk Battalion and other units drove the attackers back, but two days later, the ALA commander reported that Haganah forces were 'trying to cut off the Lajjun area from Tulkarm in preparation for seizing Lajjun and Jenin....' In summing up the military situation in Palestine on 8 May, al-Qawuqji reported 'great activity' and 'fully equipped and armed [Haganah]  concentrations north of Jenin' and 'heavy fighting in the 'Ara sub-disctrict,' i.e., some 12 km southwest of al-Lajjun. It is not clear whether the village of al-Lajjun had come under Haganah control by this time or whether it held out for about three more weeks, as the History of the War of Independence states.

During the second truce, in early September, a United Nations official fixed the permanent truce line in the area at al-Lajjun, according to press reports. A 500-yard area was established on both sides of the line in which Arabs and Jews were allowed to harvest crops.

In 1949 Israel established the settlement of Yosef Kaplan, which was later renamed Kibbutz Megiddo (167220), about 0.5 km to the northeast of the village site. At the time of its construction the traditional landholdings of a chain of Palestinian villages, stretching between the town of Umm al-Fahm and al-Lajjun, had been amalgamated to form a large bloc. The settlement's proximity to al-Lajjun suggests that it was built on land that had once belonged to al-Lajjun, but this land may have belonged to a neighboring village in earlier times.

Only the white stone mosque, one village mill, the village health center, and a few partially destroyed houses remain on the site (see photos). The mosque has been converted into a carpentry workshop and one of the houses has been made into a chicken coop. The health center and grain mill are deserted, and the school is gone. The cemetery remains, but it is in a neglected state; the tomb of Yusuf aI-Hamdan, a prominent nationalist who fell in the 1936 revolt, is clearly visible. The surrounding lands are planted with almond trees, wheat, and barley; they also contain animal sheds, a fodder plant, and a pump installed on the spring of 'Ayn al-Hajja. The site is tightly fenced in and entry is blocked. 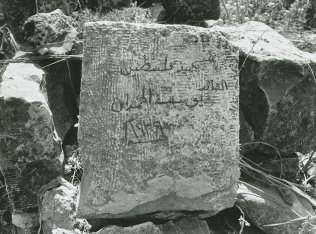 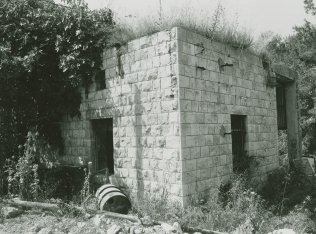 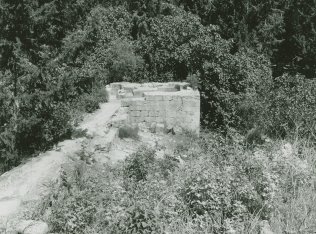 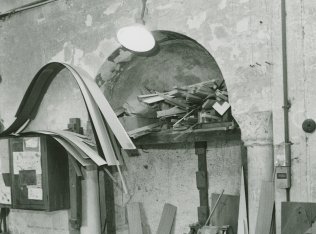 The Battle for Haifa and Its Surroundings 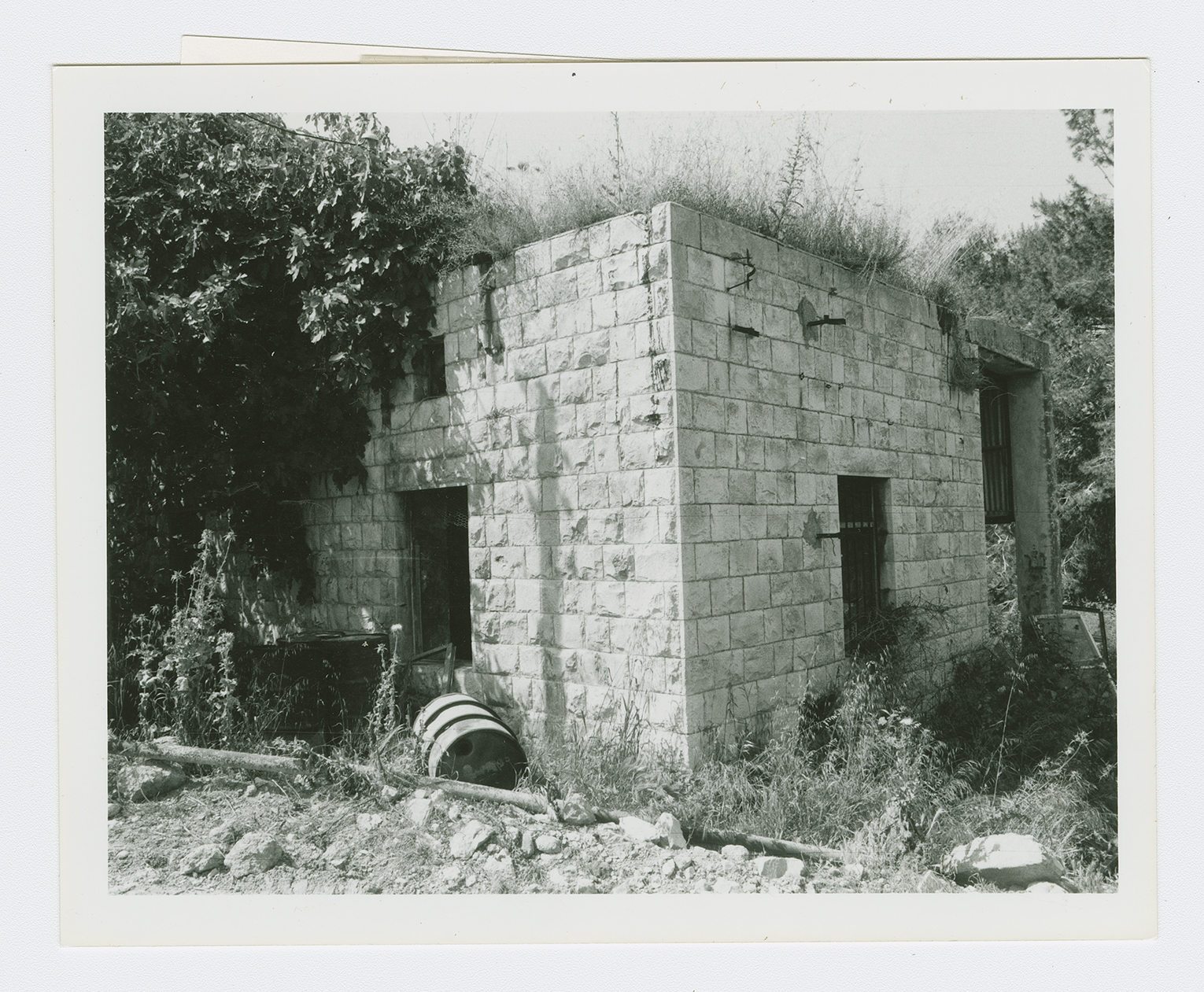 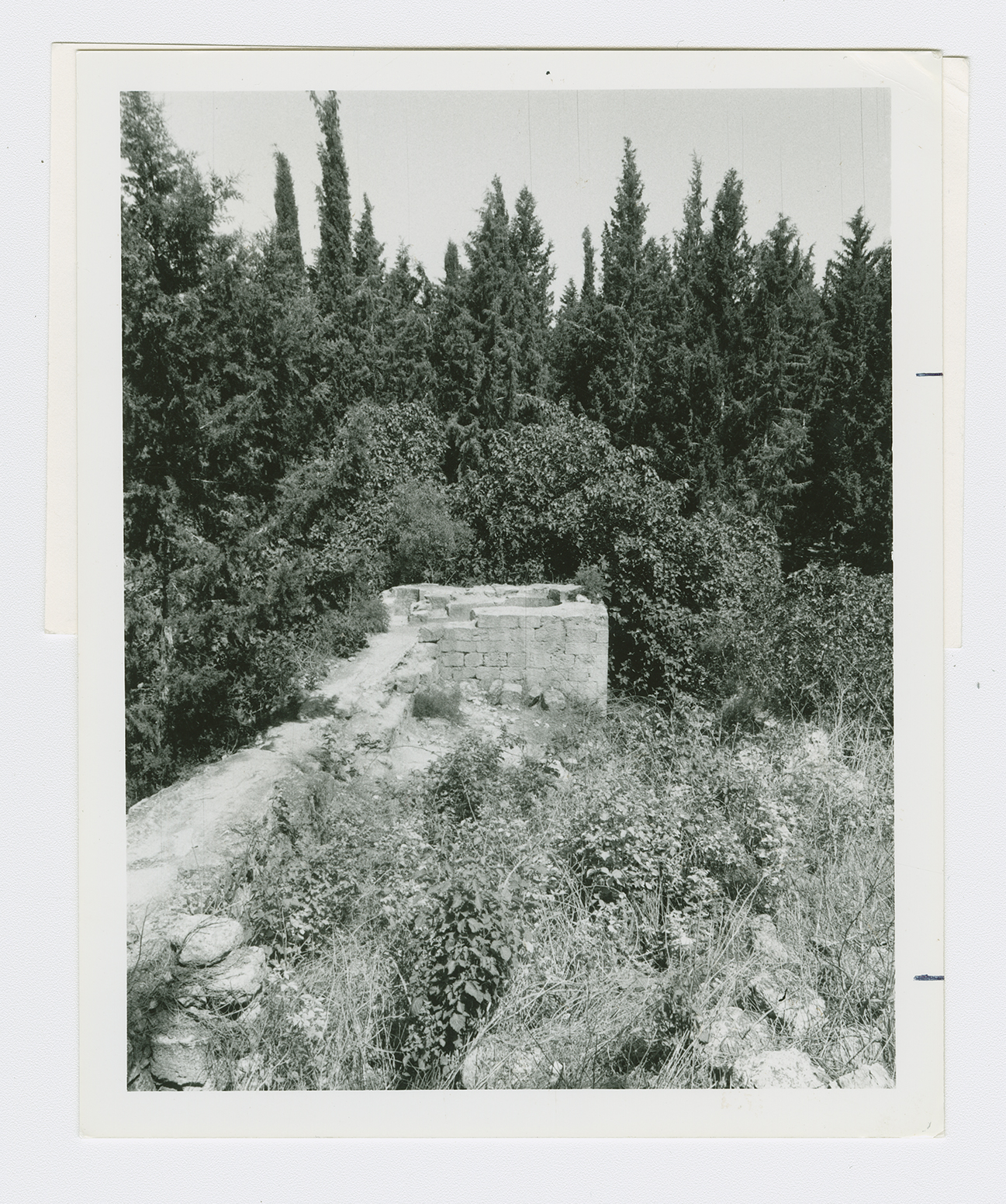 Remains of the mill. 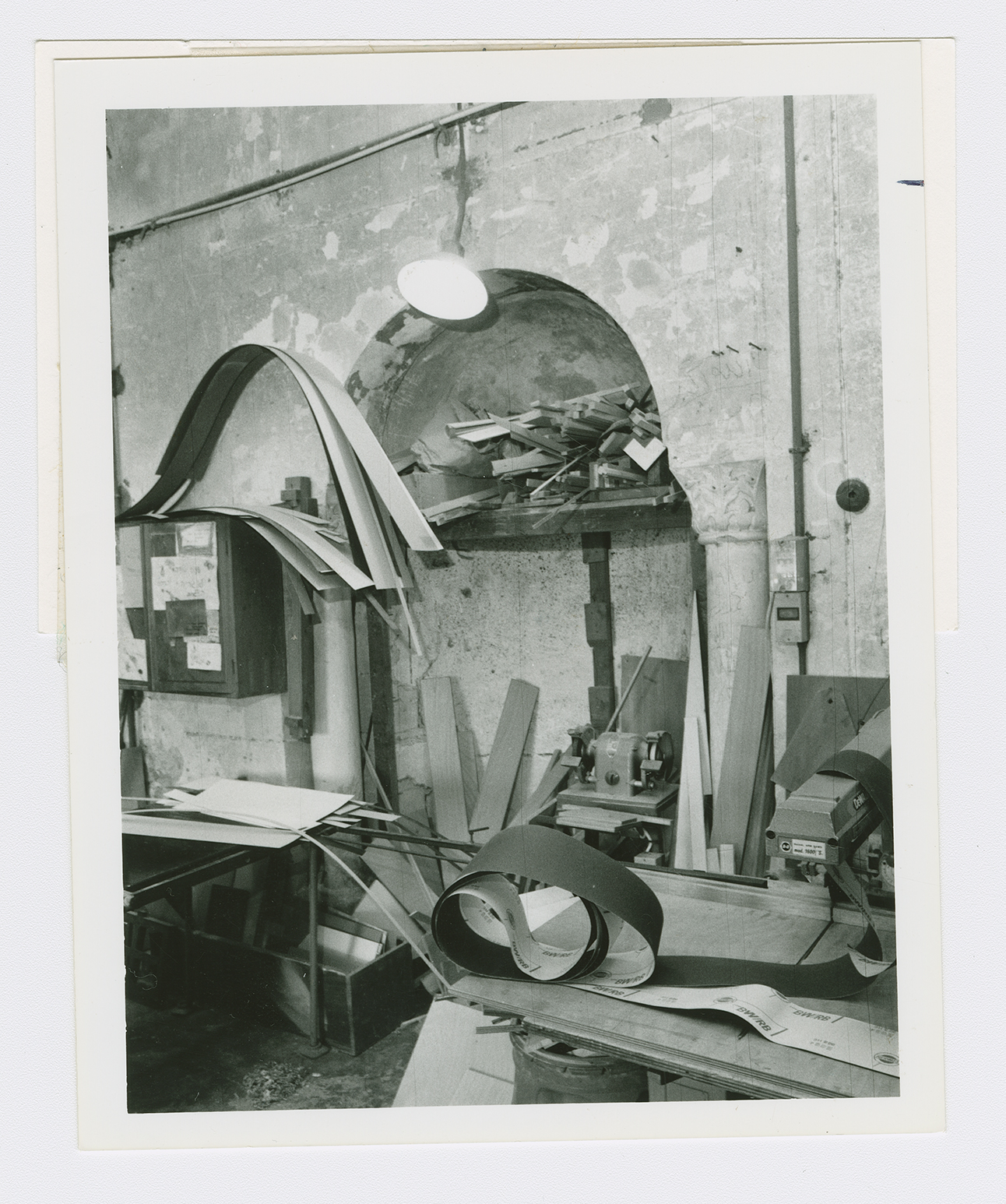 The interior of the mosque, now an Israeli carpentry workshop. 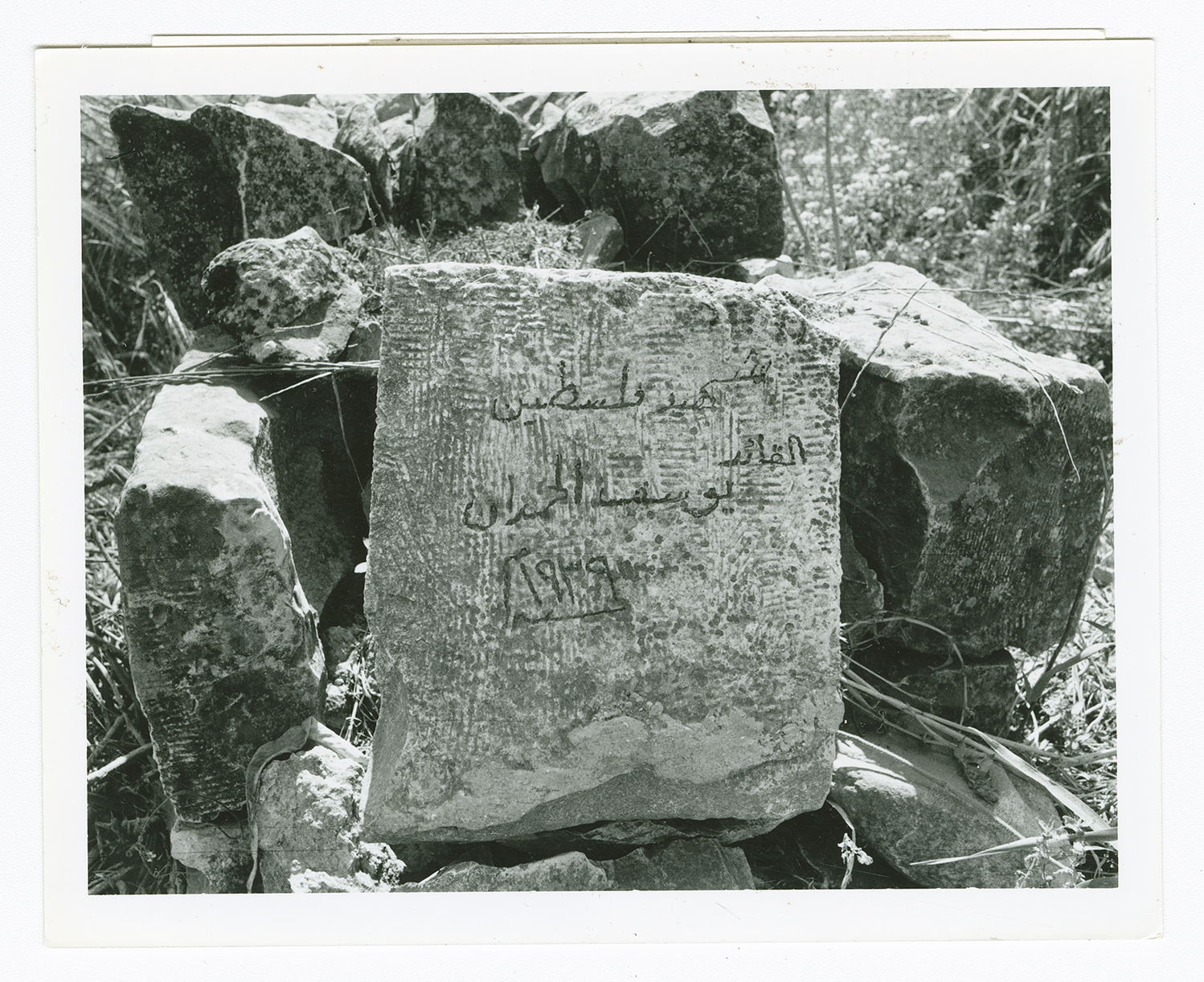 The grave of Yusuj al-Hamdan, killed in the 1936-39 uprising against the British. The tomb is located in a cemetery in al-Lajjun for Palestinians killed in the pre-48 struggle.