The village stood on the western slopes of the Nablus Mountains, overlooking the route of a major international highway that ran north-south through Palestine in ancient times: the Via Maris. Majdal Yaba was directly on the eastern side of this route and was also east of a modern highway that ran north from Lydda and then split into two branches, one of which went west to Tel Aviv and Jaffa and another continuing north to Tulkarm. The Lydda-Tulkarm railway line passed about 2 km west of it. The village was given different names in different periods; the Romans called it Aphekou Pyrgos ('tower of Aphec') but the Crusaders knew it as Casal Mirable. Mirable was an important administrative center for the Crusaders until it fell into Muslim hands in 1187. Salah al-Din al-Ayyuba (Saladin) made it a base for raids on the Crusaders positioned on the coast and camped near the castle in 1192. Later the castle was destroyed to prevent its reuse by the Crusaders. The Arab geographer Yaqut al-Hamawi (d. 1228) called it Majdal Yafa. Its name at this time may have referred to the city of Jaffa (Yafa in Arabic) which, according to al-Hamawi, was close to the village. AI-Hamawi said that the village had a formidable fort.

In 1596, Majdal Yaba was a village in the nahiya of Jabal Qubal (liwa' of Nablus) with a population of forty-four. It paid taxes on a number of crops, including wheat and barley, as well as on other types of produce, such as goats and beehives.

In the nineteenth century it was named Majdal al-Sadiq, after one of its chiefs, al-Sadiq, the head of the Rayyan family.

They were a branch of the Bani Ghazi tribe, who had immigrated from Transjordan in the seventeenth century. In the 1850s the Rayyan family controlled twenty-two villages in the western half of the sub-disctrict of Bilad al-Jamma'in and maintained a fortress-cum-manor in Majdal Yaba. In the mid-1850s, however, they became embroiled in warfare against local competitors and were defeated; by 1860 had lost all of their influence in the region

, and even though Majdal Yaba was still their home village it was no longer a center of political power.

In the nineteenth century, Majdal Yaba was a large village situated on high ground above a plain. Robinson said that the village contained a large house for its shaykh, al-Sadiq, in 1852

, and another traveler noted the same thing a decade later.

Later in the nineteenth century visitors to the village noticed the remains of a church.

The layout of the village approximated a parallelogram. Its houses, constructed of mud and straw or cement and stone, were built very close to each other, separated only by narrow alleys. Each hara (neighborhood) was inhabited by members of a single hamula and contained a diwan for receiving guests and public meetings. The population was predominantly Muslim. The village had a mosque (built in 1935), a clinic, and a school that was founded in 1888 under Ottoman rule and was reopened in 1920. In the mid-1940s, 147 students were enrolled.

Agriculture constituted the mainstay of the economy. The villagers planted rainfall crops such as wheat, corn, barley, and sesame. They also grew vegetables and tended fruit trees, especially citrus. Their fruit and vegetable crops were irrigated from artesian wells. In 1944/45 a total of 2,443 dunums was devoted to citrus and bananas and 13,085 dunums were allotted to cereals; 110 dunums were irrigated or used for orchards. The main visible antiquities in the village were the Crusader fortress of Mirabel and Tall Ra's al-'Ayn, which has been excavated. This tell contained artifacts dating from the fourth millennium B.C. The tell was surmounted by an Ottoman fortress, Bina Bashi, that was constructed in 1571.

On the same day that the town of Ramla was captured, some of the Israeli units involved in Operation Dani (see Abu al-Fadl, Ramla sub-disctrict) were deployed northwards to secure the operation's northern flank. On 12 July 1948, the Second Battalion of the Alexandroni Brigade occupied Majdal Yaba, wresting control of the village from the Iraqi forces defending it. The site of the former village of Ra's al-'Ayn (deserted since the 1920s) was occupied the following morning in the same maneuver, and the New York Times reported that the situation of the Iraqi troops in Majdal Yaba, surrounded as they were by Israeli forces, was 'hopeless.' According to the History of the War of Independence, 'The occupation [of the two villages] did not merely lead to the control of the hills lying to the north of the operational zone, it also gave us the springs of Yarkun [the 'Awja River], which had supplied Jerusalem with water in the past.' The same source also noted that Iraqi forces in this sector later tried to recapture the village but were driven back after suffering 'large losses.'

The site is covered with the rubble of the destroyed houses, fig trees, and cactuses. The fortress, an impressive structure with thick, stone walls, still crowns the site. It consists of a long central building that is connected to a number of smaller ones on both ends; it has been abandoned, and parts of it are crumbling. In addition to the fort there is the tomb of al-Sadiq, after whom the village was named. The tomb has a narrow, relatively high entrance and a dome resting on a stone pedestal that is cracking in several places. Part of the village cemetery still remains, and one of the graves is covered by a box-like superstructure. 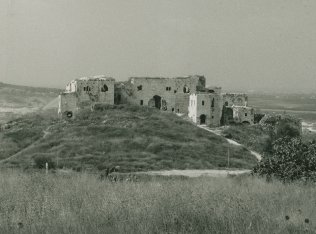 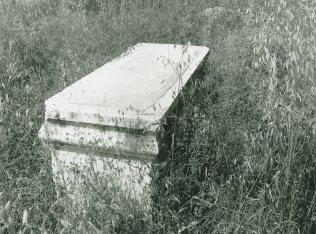 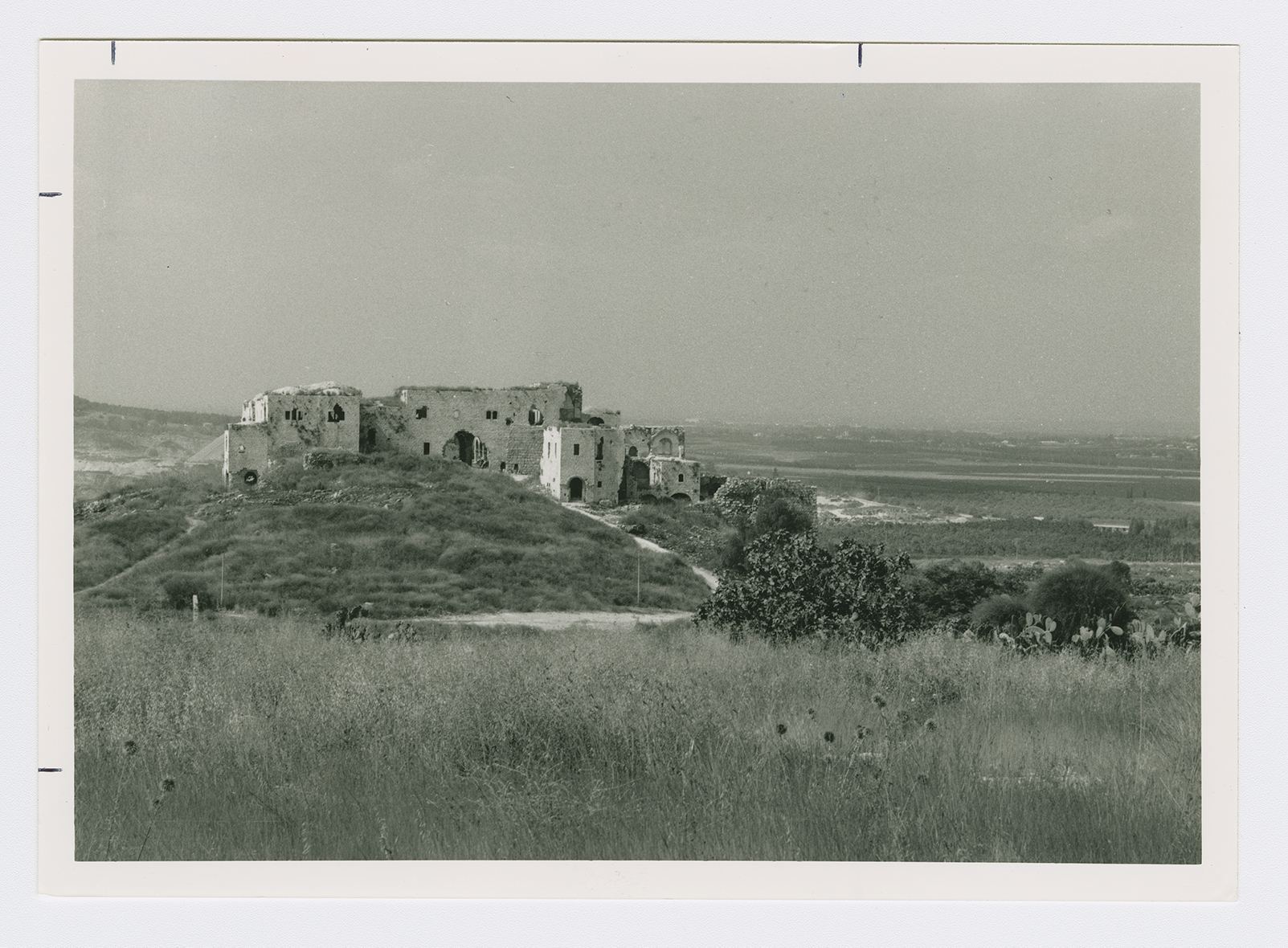 View from the north of the Rayyan family fortress-cum-manor. 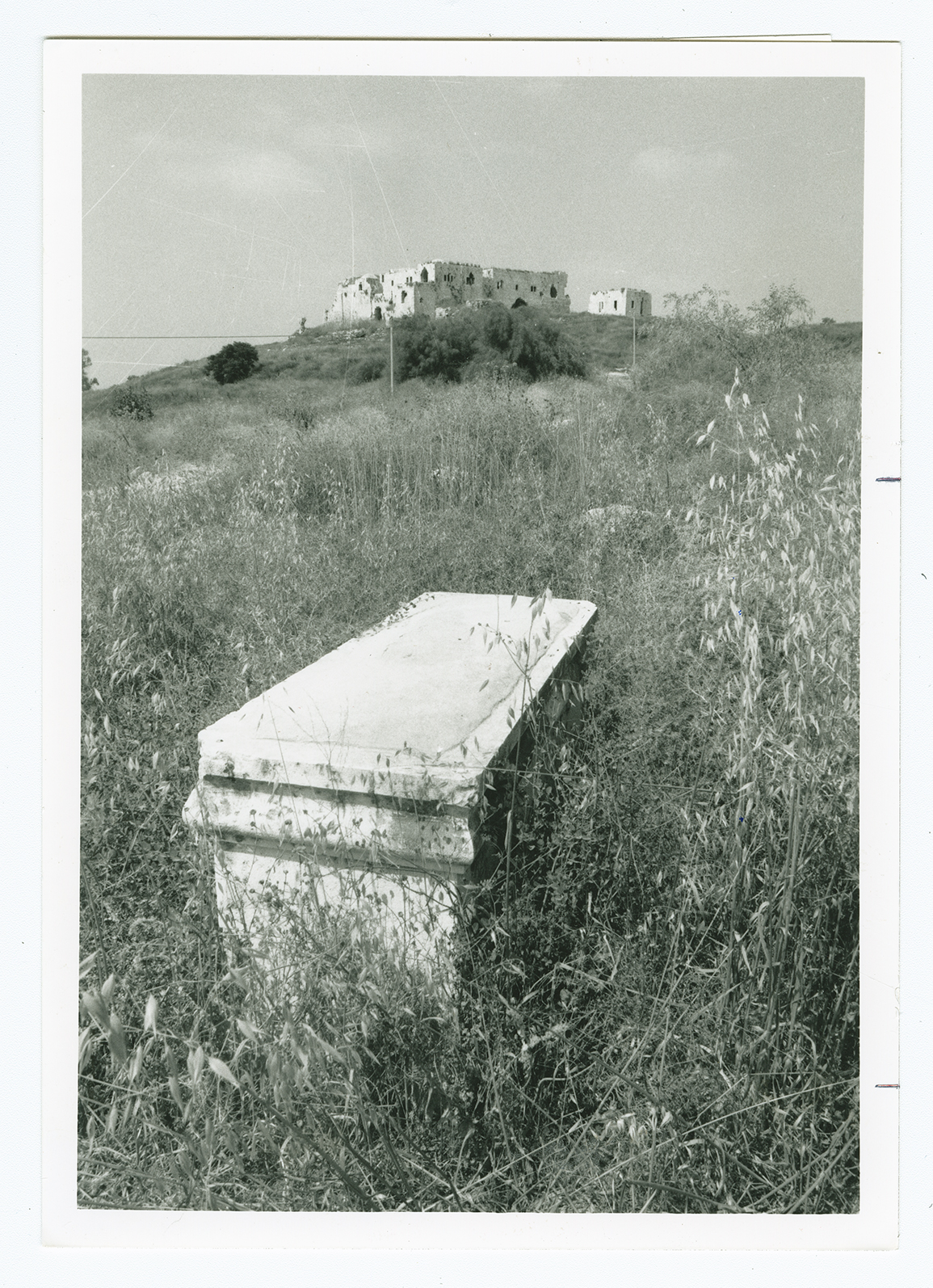 A grave in the cemetery of Majdal Yaba.