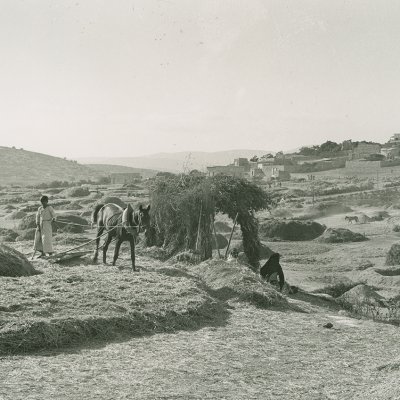 The village stood on the southwestern slope of an outcrop of eocene sedimentary rock that rose about 110 m above the plain to the south. A secondary road linked it to the highway leading to Nazareth and the coastal highway to the northwest. The area around Saffuriyya constituted a gateway to Lower Galilee, a location that had accorded it strategic significance since ancient times. Its name may have been derived from the Syriac word 'Sefre' (bird), possibly a reference to the hill upon which it perched, like a bird. Soon after the Roman conquest of Palestine Saffuriyya became the administrative center for all of Galilee. After the suppression of the First Jewish Revolt in A.D. 70 the town gradually became a center of Jewish religious life. It was then called Sepphoris; later, under Hadrian, it was called Diocaesarea.

It had both a Jewish community and a Christian community during the Byzantine period.

Saffuriyya was taken by the Muslims in A.D. 634, in the early days of the Muslim conquest. It figured prominently in subsequent history. The Crusaders, who called it Le Sephorie, built a castle there; Salah al-Din al-Ayyubi (Saladin) wrested it from their hands after the battle of Hittin in A.D. 1187. A number of Arab and Muslim geographers and chroniclers, including al-Baladhiri (d. A.D. 892), Yaqut al-Hamawi (d. A.D. 1228), and Ibn al-'Imad al-Hanbali (d. 1678) made references to Saffuriyya. AI-Hamawi, for example, reported in his Mu'jam that it was a village next to Tiberias. Saffuriyya was the hometown of a number of Arab and Islamic scholars, including Abu al-Baqa' al-Saffuri (d. 1625), who was very influential and became a judge in Safad and in several cities in what are today known as Syria and Lebanon. Another was Ahmad al-Sharif, also known as al-Saffuri al-Dimashqi (d. 1633), a judge and poet.

In 1596, Saffuriyya was a village in the nahiya of Tiberias (liwa' of Safad) with a population of 2,200. It paid taxes on a number of crops, including wheat, barley, and olives, as well as on other types of produce and property such as goats, beehives, and a press that was used for processing either olives or grapes.

In 1745, Zahir al-'Umar al-Zaydani (1695–1775), who became the effective ruler of northern Palestine for a short period during the second half of the eighteenth century, built a fortress on the hilltop above Saffuriyya. The church of Saint Hanna ('Anna') was built in the village atop the ruins of a large, late-sixth-century cathedral.

In the early nineteenth century, the British traveler J. Buckingham noted that all of its inhabitants were Muslims and that the ruins of the house of St. Anna had been completely demolished.

Later in the nineteenth century, Saffuriyya was a village built of stone and mud and situated along the slope of a hill. The village contained the remains of the Church of St. Anna and a square tower, said to have been built in the mid-eighteenth century. The residents, whose number was estimated at 2,500, cultivated 150 faddans (1 = 100–250 dunums); they planted olive trees in some of this land (see photo).

Modern Saffuriyya was the largest village in the Nazareth sub-disctrict in terms of population and land area. Its houses were made of cement and mud, and it was laid out in a rectangular grid, with its streets intersecting at the commercial center. In later years house construction expanded northwestward and southeastward. The population consisted of 4,320 Muslims and 10 Christians. Saffuriyya had two elementary schools, one for boys and another for girls; the boys' school was founded in 1900, during Ottoman rule. A local council was established in it in 1923. The council's expenditures, which were slightly less than its revenues, grew from 74 Palestinian pounds (P£) in 1929 to P£1,217 in 1944.

The area around Saffuriyya was well endowed with fertile soil and surface and underground water resources. Agriculture was the mainstay of the economy, with olives being the chief crop. In 1944/45 a total of 21,841 dunums was allocated to cereals; 5,310 dunums were irrigated or used for orchards, of which 3,720 dunums were planted with olive trees.

Archaeological research has made it clear that Saffuriyya had been inhabited almost continuously from Hellenistic times, despite the fact that its buildings were destroyed more than once. Excavations in 1931 revealed a Roman amphitheater to the northwest that could seat from 4,000 to 5,000 people and that was probably built in the first century A.D. A recently discovered mosaic testifies to the wealth and culture of Roman Sepphoris.

A later inscription refers to the restoration of a church in Saffuriyya in A.D. 516-517.

, and its third storey was added later, during the reign of the Ottoman sultan 'Abd al-Hamid II.

Israeli accounts of the capture of Saffuriyya emphasize its reputation for resistance to Zionist forces. The first mention of an attack on Saffuriyya was made by the New York Times. It quoted an Israeli air force communiqué that claimed that direct hits were scored on the village on 30 May 1948. It was occupied two weeks later as a prelude to the attack on Nazareth during Operation Dekel (see 'Amqa, Acre sub-disctrict) by an armored battalion of the Sheva' Brigade and two infantry battalions of the Carmeli Brigade. The History of the War of Independence states that on the night of 15 July 1948, the combined force 'reached the outskirts of Saffuriyya after penetrating almost 15 kilometers into enemy territory…. Immediately, it closed ranks to launch the attack…. The Arabs of Saffuriyya were always known in the Galilee as fierce warriors, but the village fell with almost no fighting because of the extreme surprise.' The occupation was completed at dawn. However, Israeli historian Benny Morris indicates that the village 'put up strong resistance to the IDF [Israel Defense Forces] advance'; as a result, he suggests, Saffuriyya was levelled and its inhabitants expelled. He also writes that the village 'had strongly supported Qawuqji's troops [i.e., the Arab Liberation Army] and had a history of anti-Yishuv behaviour (1936–39).'

The people of Saffuriyya later recounted a version of events that does not correspond exactly to either Israeli account. They told Palestinian historian Nafez Nazzal that their village had been bombed by three Israeli planes during the night of 15 July, dropping 'barrels filled with explosives, metal fragments, nails and glass.' The bombs killed and wounded a number of villagers, and many fled to the orchards for cover. The village militia remained, fighting haphazardly. One participant stated, 'We were disorganized…. We fought independently, every man for himself. There was no communication or coordination among us.' The battle was soon over, and by morning many of those hiding out in orchards decided to leave, going northwards or eastwards.

Villagers reported that a small number of people remained in the village and that only a few managed to return for belongings. But Israeli sources claim otherwise; Morris states that those remaining were expelled in September 1948, but 'hundreds infiltrated back' in the following months, so that 'the Jewish authorities feared that if the infiltrees were left in place, the village would soon return to its pre-war population of 4,000. Besides, neighboring Jewish settlements coveted Saffuriyya lands.' One senior settlement official stated in November 1948: 'Next to Nazareth is a village …. whose distant lands are needed for our settlements. Perhaps they can be given another place.' Consequently, Morris states, the inhabitants were loaded on trucks in January 1949 and expelled again to the Arab communities of 'Illut, al-Rayna, and Kafr Kanna. Beginning in February, some of the village lands were given to the kibbutz of ha-Solelim.

Morris states that the settlements of Sde Nachum (195214) and Cheftzi-Bah (190213) also got portions of the village land. 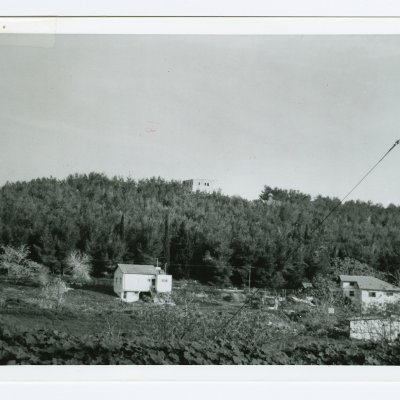 The agricultural settlement of Tzippori (176239), located 3 km southeast of the village site, was founded on village land in 1949.

Only a few houses remain on the site, including those of 'Abd al-Majid Sulayman and 'Ali Mawjuda. Otherwise the site is covered by a pine forest planted by the Jewish National Fund to commemorate a number of persons and occasions (such as Guatemala's Independence Day) (see photo). Zahir al-'Umar's fortress still stands atop the hill, though some of its walls have collapsed. It is ringed by excavation sites. On the northern side of the village the monastery of Saint Anna still remains and serves as an orphanage for Palestinian children. There is also a Roman Orthodox church (see photos). Along the southern road to the village there is a synagogue that was originally a Muslim shrine. Next to it lies a recent Israeli cemetery. 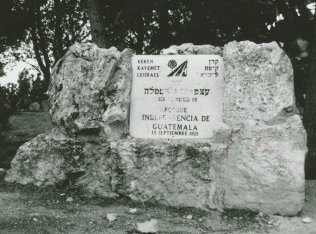 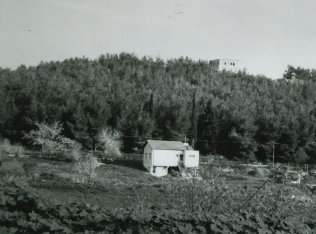 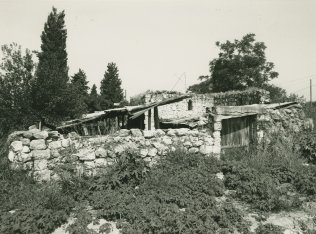 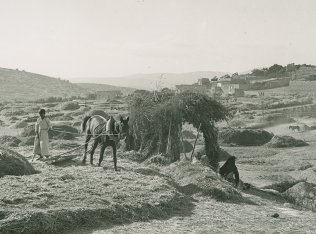 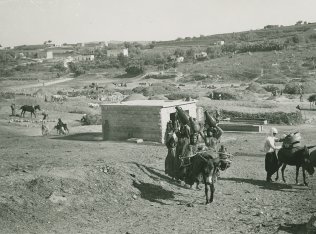 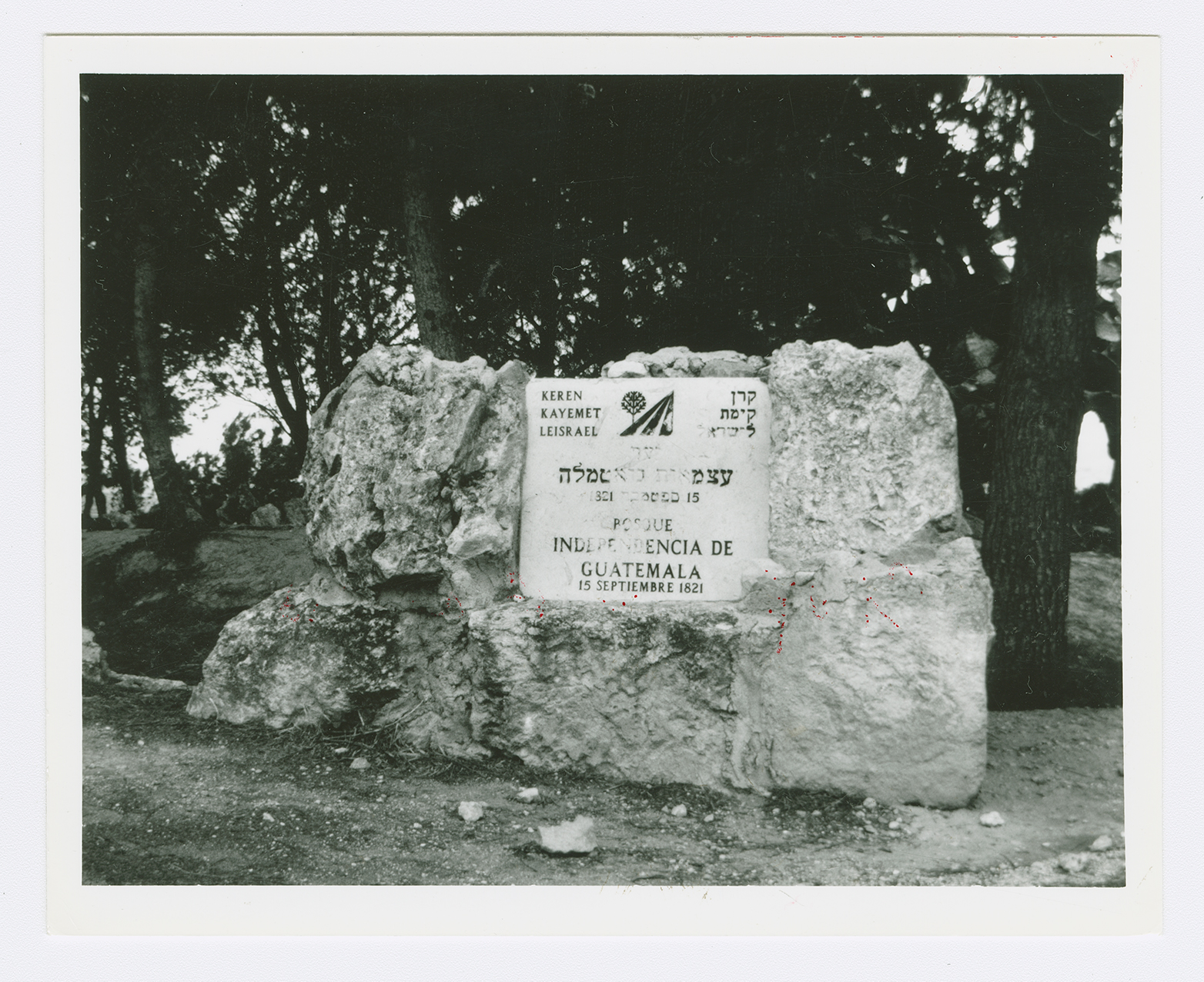 A forest established on the village site dedicated in honor of Guatemalan independence.

The village site and houses on the settlement of Tzippori. 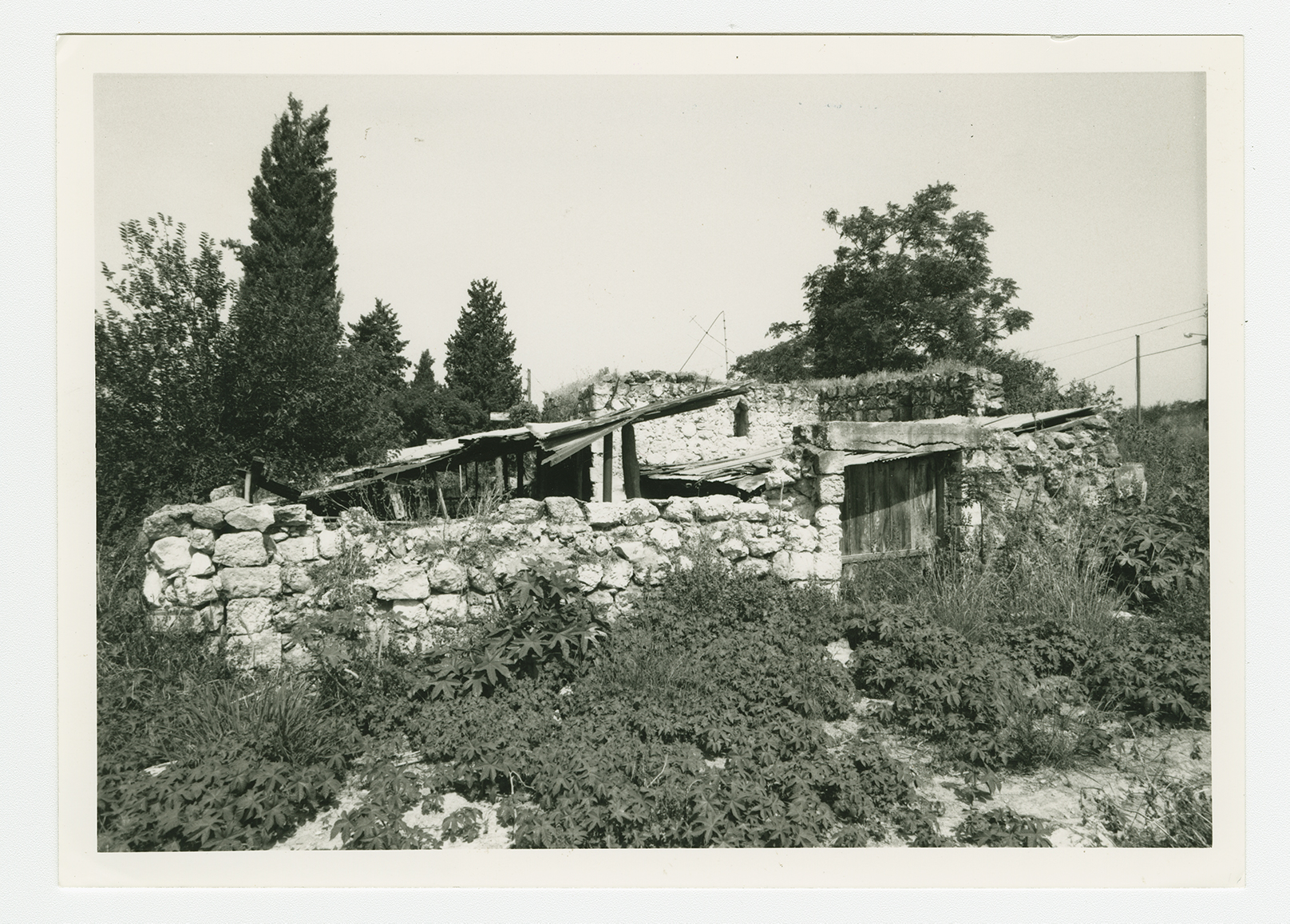 Remains of a village mill.

Threshing floors below the village of Sajjuriyya. 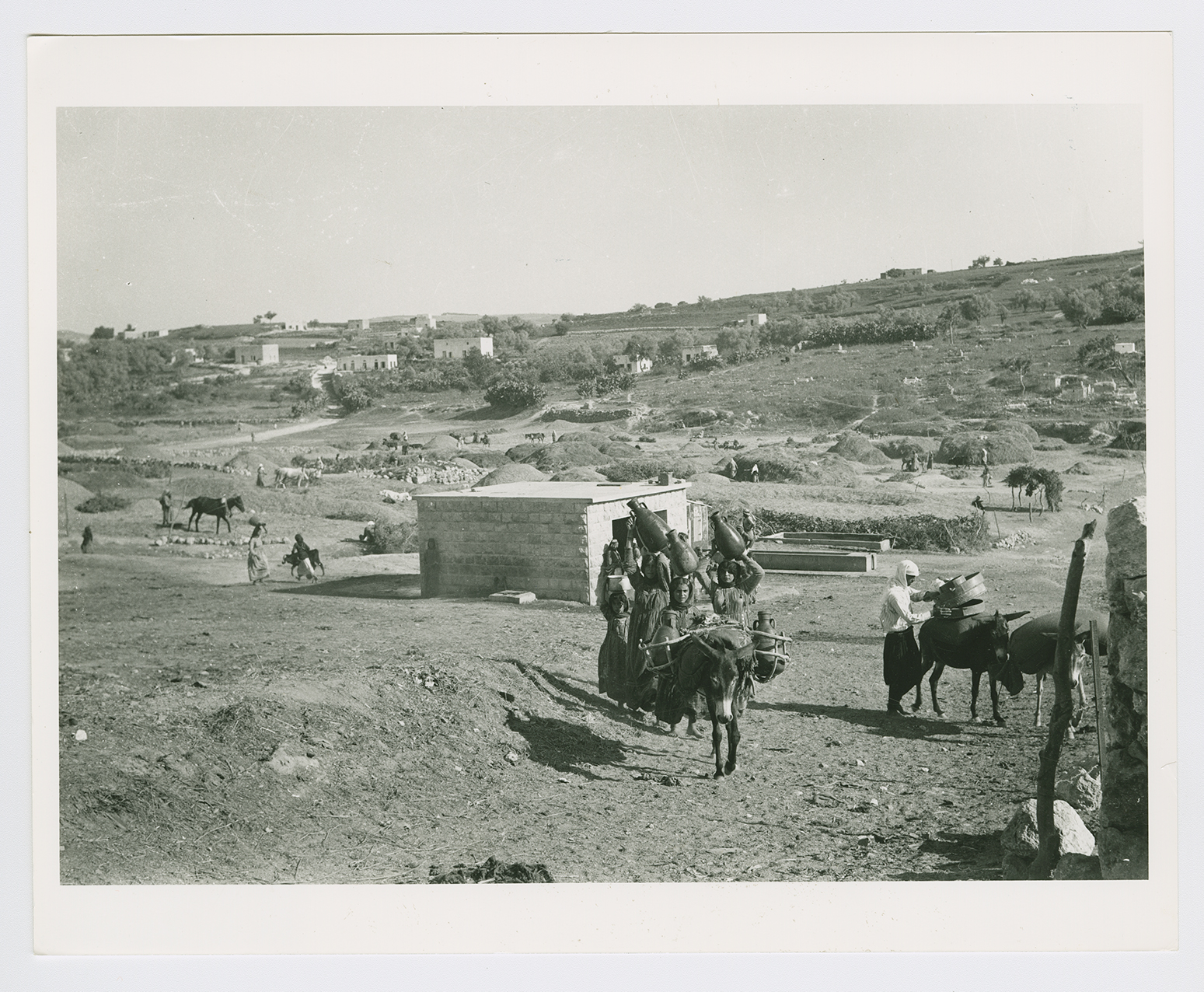