The village was situated on flat terrain on the central coastal plain, linked to Jaffa and Ramla by the highway between these two cities, and to Jaffa and Lydda by the railway line running between them. The earliest evidence that we have about the habitation of the site dates from the Chalcolithic (ca. 5000 B.C.). Two caves in Yazur contained the best known burials in coastal Palestine during that time. Yazur was mentioned in the annals of the Assyrian ruler, Sennacherib (early eighth century B.C.), as Azuru. It was mentioned in the Septuagint text (Joshua 19:45) as Azor. In the twelfth century the Muslims and Crusaders contested the village and it exchanged hands more than once. The Arab geographer Yaqut al-Hamawi (d. A.D. 1228) described it as a small town that was the birthplace of several important figures during the Fatimid period, most prominent among them al-Hasan ibn 'Ali al-Yazuri, who became a powerful minister in A.D. 1050.

In 1596, Yazur was a village in the nahiya of Ramla (liwa' of Gaza) with a population of 275. It paid taxes on a number of crops, including wheat, barley, fruit, and sesame, as well as on other types of property, such as goats and beehives.

The Sufi travellers al-Bakri al-Siddiqi (who traveled in the region in the mid-eighteenth century) and Mustafa al-Dumyati (d. 1764) reported visiting the shrine of a sage called Sayyiduna ('our master') Haydara in Yazur.

In the late nineteenth century, Yazur was a village built of adobe brick with dispersed gardens and wells. The village also contained a domed shrine.

Modern Yazur was divided into four quarters, one for each of four clans (hama'il, sing. hamula) that lived there. The houses were made of stone or adobe brick and straw and were built in groups called ahwash (pl. of hawsh, 'courtyard'). Each house in such a group opened onto a common courtyard that had a single entrance, often an arched gate. In 1944/45 the population consisted of 4,010 Muslims and 20 Christians. The village had two elementary schools, one for boys (built in 1920) and another for girls (opened in 1933). The boys' school occupied 27 dunums (the bulk of which was allocated for training students in agronomy) and had its own artesian well. In 1947, 430 boys and 160 girls were registered in these schools. The remnants of a Crusader castle—Casel des Plains—that Richard the Lionheart had constructed in 1191 were visible on a hill inside the village. The Crusader church had been rebuilt to serve as Yazur's mosque. Together with a coffeeshop and a marketplace, the mosque formed the center of the village.

Agriculture constituted the backbone of the economy; in 1944, citrus was planted on 6,272 dunums and 1,441 dunums were allocated to cereals. Agriculture was both rainfed and irrigated; 1,689 dunums were irrigated or used for orchards. During World War II, the villagers also started raising Holstein cows, and by 1947 numerous artesian wells were being used for irrigation.

According to Israeli historian Benny Morris, Palmach units had begun destroying houses in Yazur in hit-and-run attacks in January and February 1948. Other sources state that Yazur, located in a vulnerable area outside Tel Aviv, was raided as early as December 1947. The newspaper Filastin reported an attack on 11 December, in which a pick-up truck sped through Yazur, throwing bombs at a coffeehouse and barber shop, without causing casualties. Palestinian historian 'Arif al-'Arif reports that on 18 December, Zionist troops disguised as British soldiers drove into the village and threw several bombs at the coffeehouse, which was located on the main road, killing six villagers. The New York Times reported that five days after this incident, the Jewish Agency demanded that a curfew be imposed by the British authorities on Yazur and other Arab 'trouble spots.' Then, on 30 December, Filastin reported that a Zionist raiding party in the process of mining a number of houses in Yazur was discovered by a patrol of villagers and driven away. The paper wrote of two other raids during the following month, on 8 and 30 January. The second raid, in which an elderly man died under the rubble of a demolished house, was carried out by attackers from the settlement of Moledet. On 22 January, the New York Times reported, a Jewish convoy was attacked near the village, and half an hour later, a truckload of workers from Yazur was ambushed; three villagers were killed and 12 were wounded.

The following month, on 12 February, a mortar and machine-gun attack was unleashed against Yazur and the nearby Jaffa suburb of Abu Kabir. The attack started just before midnight and went on until dawn. Five people were reported wounded in Yazur and 7 houses destroyed in the two communities, according to the New York Times. Filastin called it the most violent attack on Yazur to date and said that 1 person was killed and 3 houses blown up. Another major raid occurred at dawn on 20 February, when a Zionist force advanced on the village from the west and north under mortar fire. Using tanks and armored vehicles (according to an account published in Filastin), the attackers destroyed an ice factory and 2 houses, killing 1 villager and wounding 4. The forays continued on an almost weekly basis until the village was occupied.

More than one account states that the village fell on 30 April 1948, when Operation Hametz (see Bayt Dajan, Jaffa sub-disctrict) overran the villages around Jaffa and encircled the city. Records kept by Arab Liberation Army (ALA) commander Fawzi al-Qawuqji indicate that the ALA made an attempt to block the offensive by sending a unit with two field guns to Yazur to shell Tel Aviv, thus relieving the pressure on Jaffa. But the unit withdrew on 28 April to participate in another battle and Yazur fell shortly afterwards, along with a number of villages in the area. Morris writes that the village fell on 1 May, and that the British authorities initially expressed opposition to its occupation. They warned the Haganah that they would shell their positions in Yazur, which was on a major thoroughfare, if it were not evacuated by 5 May. However, a compromise was soon reached whereby the Haganah handed over to the British the houses overlooking the road, while the Haganah continued to occupy the rest. The British withdrew from Palestine two weeks later and by July, Yazur was being used as Israeli military headquarters in Operation Dani (see Abu al-Fadl, Ramla sub-disctrict). By occupying Yazur, the New York Times reported, the Haganah had seized 'one of the two last remaining strongholds in the sub-disctrict,' and was therefore 'in a position to dictate rather than listen.'

Two village shrines remain standing. One is made of stone and its roof is topped with a dozen domes clustered around a more prominent dome at the center. A number of other structures and houses also are still intact; some are utilized for various purposes but others are vacant (see photos). One house, occupied by a Jewish family, is a two-storey concrete unit that has a rectangular door and a modified gabled roof. Two other two-storey, concrete buildings are deserted. Finally, two small structures have been converted into commercial buildings; one is an Israeli clothing store and the other houses a printing shop and a pipe repair and installment business. The site contains modern apartment blocks. Cypress, fig, and sycamore trees and cactuses grow on it, and the land around it is cultivated by Israelis. 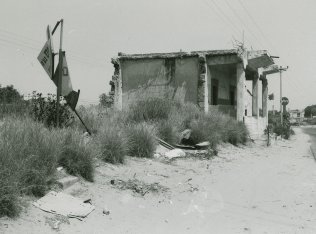 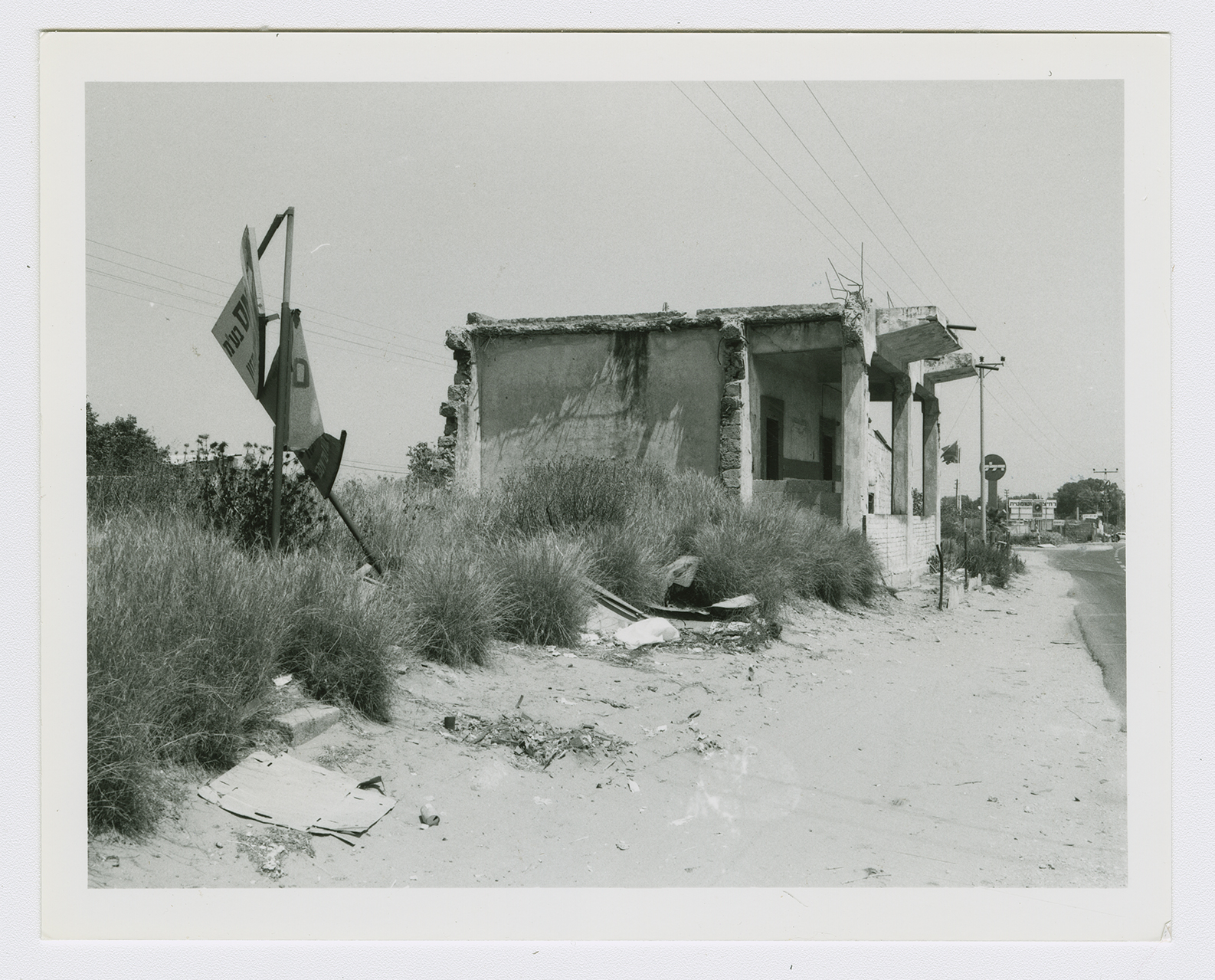 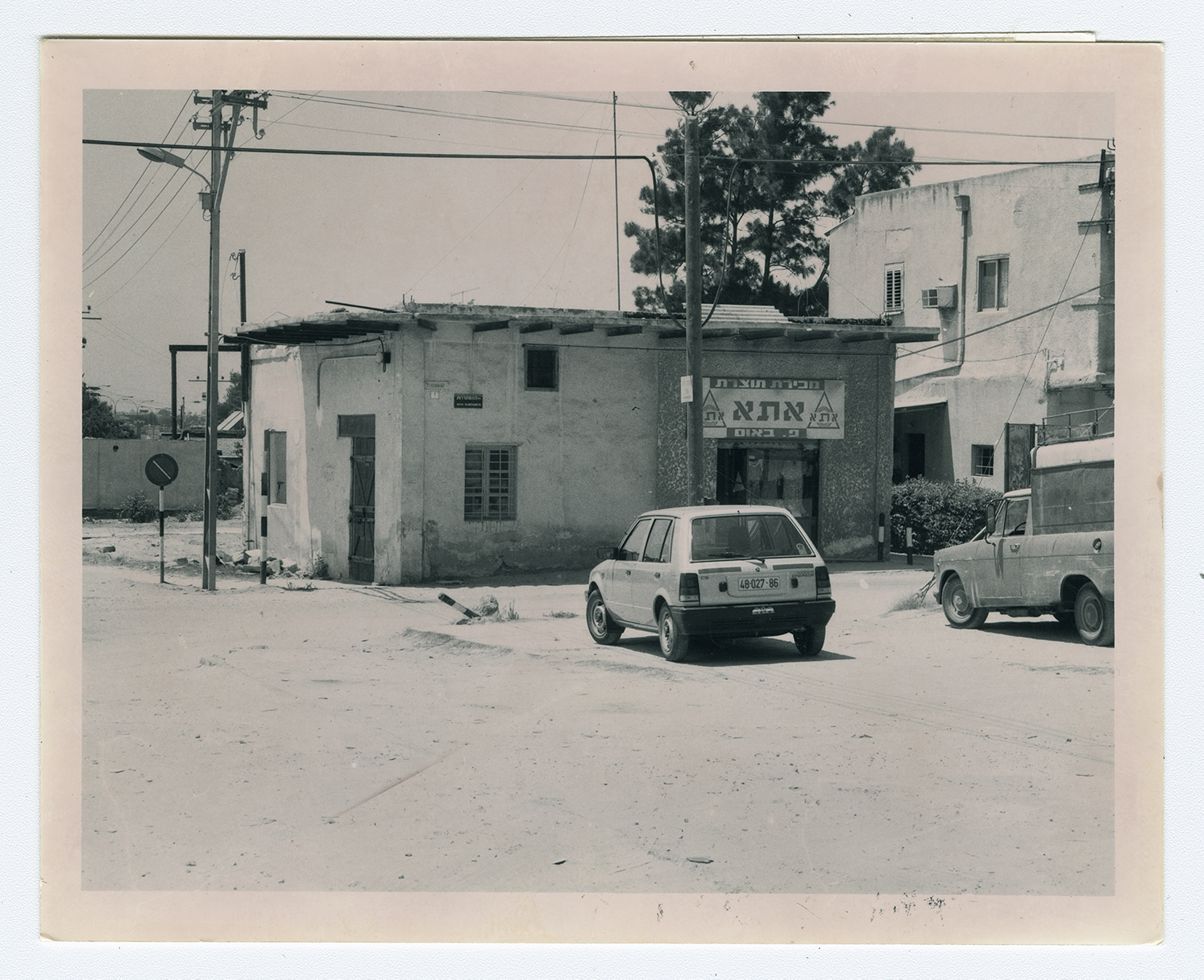 A village house in Yazur, now an outlet for a clothing factory.